Star Pillow Knitting and advent caroling; Update on my Year of Projects 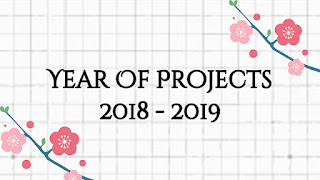 So here is my update on what I achieved this week.

I think this will be a quite short post this week, as I do not have the feeling that I achieved a lot. But I knitted on my star pillow, of course, as I am hosting the Knit Along:

As I said here >>, I will knit the Star Pillow >> from December 1 to 24 to be my Advent calendar. I opened a thread in the German speaking Ravelry-Group "Zusammenstricken" >>  and I will also share my progress in the Year of Projects group. Feel free to also acheck my blog for further information >>

It was a little frustrating inbetween, as I had to switch to DPNs instead of the circular needle inbetween. The "dangling" of the needle (or the cable, to be exact) when working magic loop was not at all convenient. So I dug deep into my needle stash and grabbed my good old DPNs. I have stopped working DPNs years ago, but after some adapting, it was ok.

The good thing is that working with the "porcupine" of 5 DPNs looks really "scary" and advanced to "knitting muggles". Nevertheless, it was good to have the KAL group, otherwise I would have probably frogged the whole thing.

We had quite an interesting discussion on  small circular needles in the Ravelry-Group "Zusammenstricken" >>  (like Addi Sockenwunder * >> or those of Chiaogoo *>> ) and I would really like to try those.


Some crochet after a long pause: Lonzo the Lama


I did not crochet for a long time, but I am currently reading a book in which one of the characters crochets amigurumi * >>, so I decided to start an amigurumi project as well - meet Lonzo, the Lama (though I think mine will be an alpaka...) >>


As you can see, I am not very far into it, but it is really fun making him so far! The patterns from this book * >> are all cute beyond believe and I cannot wait to make the next little critter- the seagull >>, maybe?


No further crafting, but some singing


That was it, crafting-wise, no further progress on my Cria cardigan >> But I went to a public carol singing in our Ettlinger castle on Friday, and it was just great!

You may want to check my Instagram for a video >> We sang a mix of modern and traditional christmas songs, and in addition to the band you see on the photo above, there also was a traditional "Posaunenchor" brass band for the more traditional songs.

Oder maybe it is "Mache Dich auf und werde Licht" >>? I cannot decide...
But as this is already part of the official catholic song book, this is meanwhile more a tradtional song ?

As for the "really traditional" songs, i.e. those who would be usually be sung in church, accompanied by an organ, my favourite is probably "Menschen die Ihr ward verloren" >> . But is usually very hard for the organ player to get the community to join in not toooo slow...

I also like "Ich steh an Deiner Krippen hier" in this version >> which we also sang on Friday, but as a child, I always sang a different melody i.e. this >>

So, that was my week so far.
Let me know in the comments which your favourite christmas or holiday song is !